National Smart Cities Mission is an urban renewal and retrofitting program by the Government of India with the mission to develop smart cities across the country, making them citizen friendly and sustainable. The Union Ministry of Urban Development is responsible for implementing the mission in collaboration with the state governments of the respective cities. While the mission initially included only 100 cities, the government later announced to expand the mission to all 4,000 cities in India. "100 Smart Cities Mission" was launched by honorable Prime Minister Narendra Modi on 25 June 2015. The Ministry of Urban Development (MoUD) program used a competition-based method as a means for selecting cities for funding, based on an area-based development strategy. Cities competed at the state level with other cities within the state. Then the state-level winner competed at the national level Smart City Challenge. Cities obtaining the highest marks in a particular round were chosen to be part of the mission.

One of the basic requirements of the smart city & system integrator project is to prepare high precise base maps using the most appropriate and advanced mapping technologies available in India. These base maps have to be accurate enough so that the further process of design, analysis, system integration in smart city project can be implemented smoothly. Hence such base maps should at least have the accuracy of 10 to 15 cm in X, Z, X coordinates.

3D Mobile LiDAR (Light Detection And Ranging) Technology using ‘Lecia Pegasus Two’ for mapping along all the accessible roads in the city :

In any city, the road network are the most important components to be accurately mapped. They are primarily used for transportation purpose and traffic management in the city. Secondly, most of the utilities in the city are laid besides the roads viz. Water lines, sewage lines, OFC / Telephone cables, Gas pipe lines, electric cables etc. Most important each and every property in the city are connected with road network. The length of road network in developed cities are in few thousands of Km. Hence rapid and accurate mapping of these road networks along with road side utilities is highly essential in any smart city projects.

We can achieve the above task by 3D Mobile LiDAR (Light Detection And Ranging) Technology using ‘Lecia Pegasus Two’ for mapping along all the accessible roads in the city to the accuracy of +/- 5 cm. We can capture about 150 to 200 Km of road networks per day using our two numbers of Leica Pegasus Two systems. Mobile LiDAR Data can be collected with the speed of vehicle varying from 10 Km / hour up to 80 Km / hour. Ideal vehicle speed maintained by us is usually 30 to 40 Km / hour on city roads. Each run of Mobile LiDAR can easily capture about 150 m corridor (i.e. 75 m on either side of the run) with dense 3D point cloud data, 360 degrees panoramic view camera data and GNSS / IMU data. Multiple runs are usually required for capturing high quality 3D point cloud data on city roads with median, grade separators and flyovers. The Leica Pegasus Two system can be mounted on ‘Mahindra Scorpio’ SUV for accurately mapping wide city roads. Whereas the same Leica Pegasus Two system can be mounted on compact ‘Maruti Eeco’ four-wheeler for accurately mapping narrow city roads. 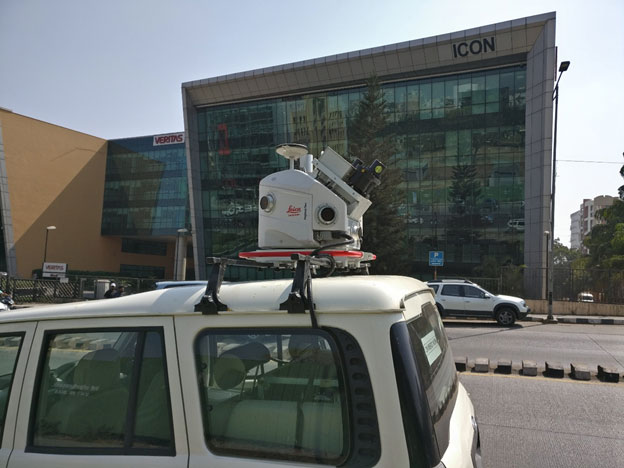 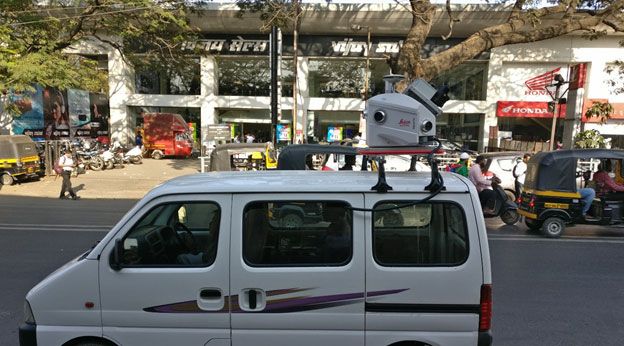 Network Survey Vehicle (NSV) using ‘Lecia Pegasus Two with pavement camera’, for mapping along the important roads of the city with heavy traffic:

The Network Survey Vehicle (NSV) ‘Lecia Pegasus Two with pavement camera’, cab be used for carrying out the pavement condition survey of all the important roads of the city with heavy traffic. As per the latest policy guidelines issued by the Ministry of Road Transport & Highways, various pavement distress of the roads like Roughness, Rutting, Distresses (Cracking, Potholes, Bleeding, Surface failure etc.) are to be measured accurately which will be useful for the operation and maintenance of the roads. All these parameters can be captured and mapped using the ‘Lecia Pegasus Two with pavement camera’ Network Survey Vehicle (NSV) for all the important and required city roads with heavy traffic conditions. 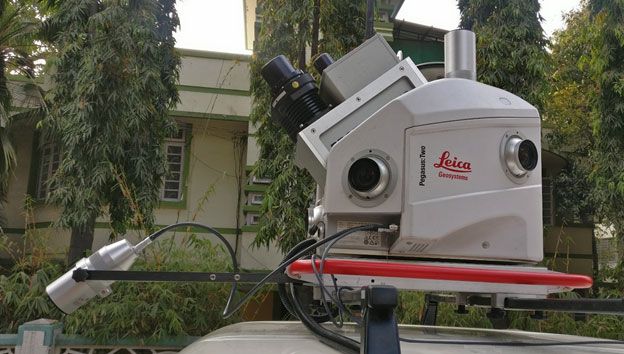 ‘Lecia Pegasus Two with pavement camera’ as a Network Survey Vehicle (NSV) for measurement of the pavement distress on city roads. 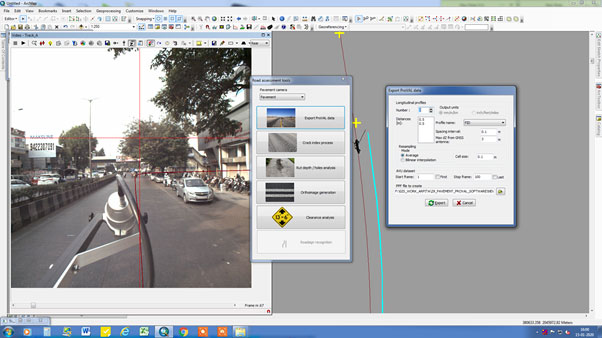 For the shadow areas which cannot be covered by the Mobile LiDAR (which runs only on the roads), the UAV / Drone survey can be carried out by using our DGCA type approved Survey Grade PPK UAV / Drone ‘Lookout VTOL’ which is made in India. It can be used for Survey data capture for completing the back-side property boundaries and processing data to produce a ground accuracy upto 10 cm in horizontal and vertical with onboard NovAtel OEM7700 PPK GPS. This data can also be useful for creating the 3D city model of any city since this contains the roof top and building facades details, required to create a 3D city model. 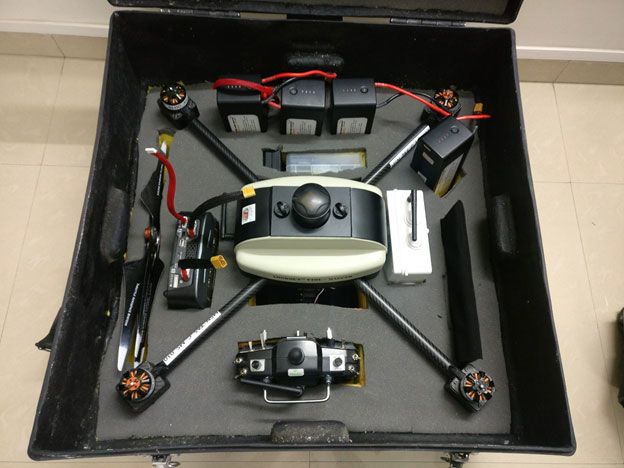 Though the Mobile LiDAR survey can be carried along the roads and the UAV / Drone survey carried in the shadow area as mentioned above, there are certain in accessible or not permitted areas in the city where both the above-mentioned methods of data capture may not be feasible. Viz. Defense establishments located in the city, sensitive locations like the airports, Nuclear R&D plants, hilly areas without much settlements etc. For such areas, the high-resolution satellite images (HRSI) can be used which have the resolution of about 0.5m on ground. If required, Stereo pairs may also be used for generating the DEM and topography of such areas. This will help to complete the missing data and thus serve the purpose of preparing the complete base map of any city. 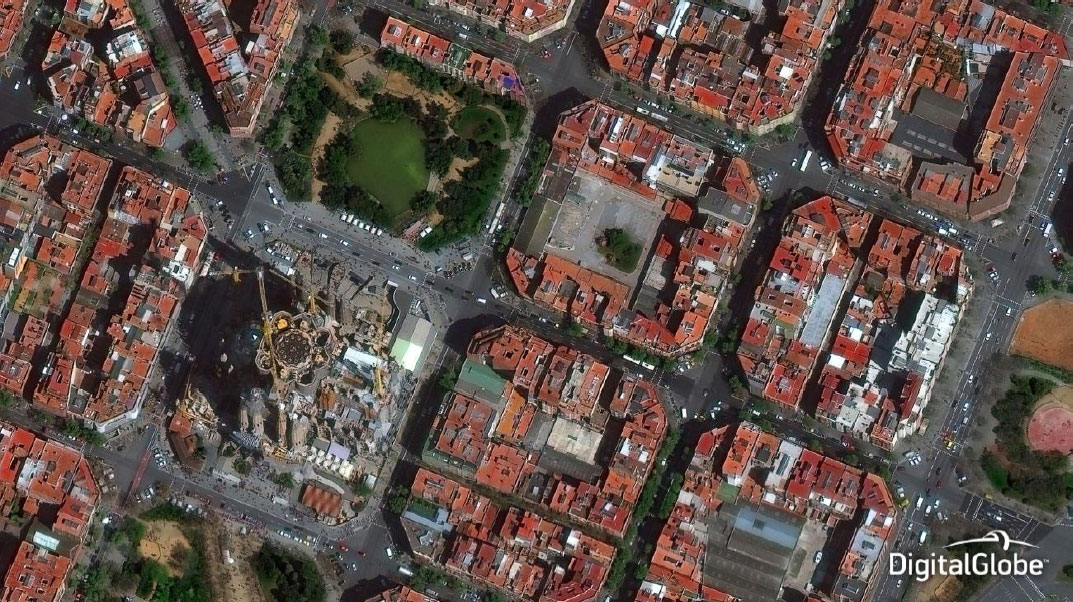 Any base map of the city prepared is incomplete till all the existing underground utilities (viz. Drainage lines, pipe lines, gas lines, OFC cables, Telephone cables, Electric lines etc.) are successfully marked on the subsurface utility map with desired accuracy level. This will be a very vital information for the planning and development of infrastructure in the smart city projects to the concerned Municipal authorities. This can be achieved by mapping all the existing underground utilities, using a high frequency (1 or 2 GHz) horn antennas and low frequency (400 - 900 MHz) horn antennas to capture the underground utilities up to about 4 m depth below the city roads using IDS RIS Hi-Pave Horn antennas.

All the data captured using above techniques are required to be seamlessly integrated to create a uniform 3D GIS base map for the further system integration process useful for the smart city project. There are various professional / commercial and open source software’s available in the market for the same. Some commercial or proprietary GIS software’s are ESRI, Bentley Systems, ERDAS, Autodesk, Supermap etc. Whereas, some of the open source GIS software’s are GRASS GIS, ILWIS, JUMP GIS, QGIS etc. Besides these GIS software’s, for preparing the 3D city models, more professional city modeling software’s are to be used like Bentley Systems - Open City planner, ESRI - City Engine etc. Depending upon the requirements of the smart city projects and the deliveries required, we can use appropriate software for delivery of the cost-effective customized GIS solution to our clients. 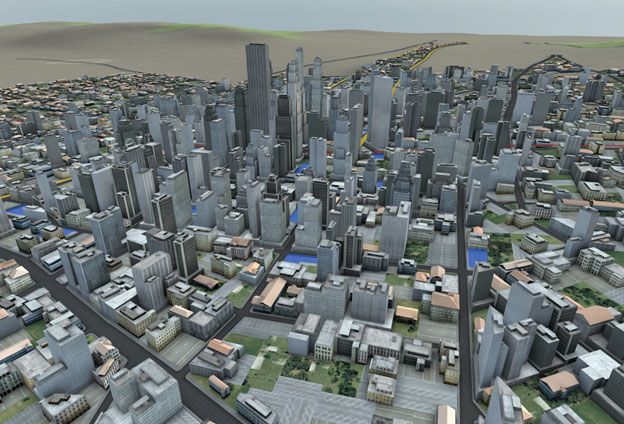 Read more, to know how we use these 'Advanced Mapping' technologies for providing Our Services »