Ground-penetrating radar (GPR) is a geophysical method that uses radar pulses to image the subsurface. This nondestructive method uses electromagnetic radiation in the microwave band (UHF/VHF frequencies) of the radio spectrum, and detects the reflected signals from subsurface structures.

GPR uses high-frequency (usually polarized) radio waves, usually in the range 10 MHz to 2.6 GHz. A GPR transmitter emits electromagnetic energy into the ground. When the energy encounters a buried object or a boundary between materials having different permittivity, it may be reflected or refracted or scattered back to the surface. A receiving antenna can then record the variations in the return signal.

Thus, operating frequency is always a trade-off between resolution and penetration. Optimal depth of subsurface penetration is achieved in ice where the depth of penetration can achieve several thousand meters (to bedrock in Greenland) at low GPR frequencies. Dry sandy soils or massive dry materials such as granite, limestone, and concrete tend to be resistive rather than conductive, and the depth of penetration could be up to 15 metres (49 ft). However, in moist or clay-laden soils and materials with high electrical conductivity, penetration may be as little as a few centimeters. Engineering applications include nondestructive testing (NDT) of structures and pavements, locating buried structures and utility lines, and studying soils and bedrock.

Ground-penetrating radar antennas are generally in contact with the ground for the strongest signal strength; however, GPR air-launched antennas are also now a days used above the ground to increase the speed of data capture when mounted on a vehicle.

“Prashant Advanced Survey LLP” have tied up with a reliable and reputed agency for carrying out the underground utilities detection and precise estimation of pavement thickness up to 2 mm accuracy, using “Ground Penetrating Radar” (GPR) technology.

We use, a four-wheeler vehicle which is mounted with high frequency (2 GHz) horn antennas to measure the pavement thickness accurately up to 2 mm for the depth of about 0.7 m and the low frequency (400 - 900 MHz) antennas are used to study the underground utilities up to about 4 m depth. This GPR system is called IDS RIS Hi-Pave Horn antennas. A GPS and video camera are also connected to this system which gives the position & location details accurately. The data capture is very fast and can capture about 100 Km of pavement data in one day. 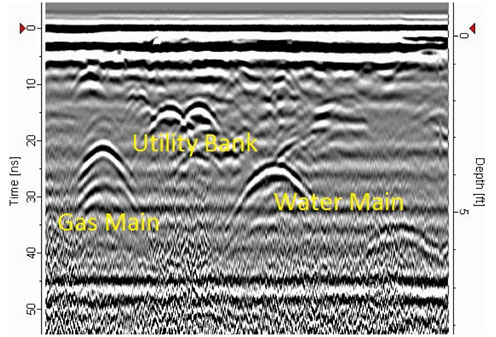 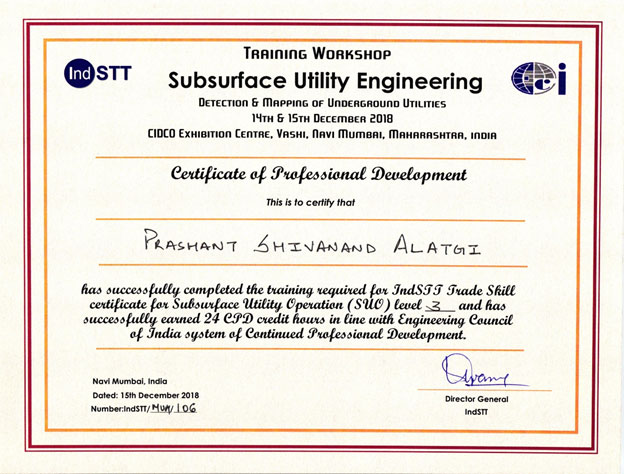 Certificate of Professional Development for Subsurface Utility Operation (SUO) on 15-12-2018. 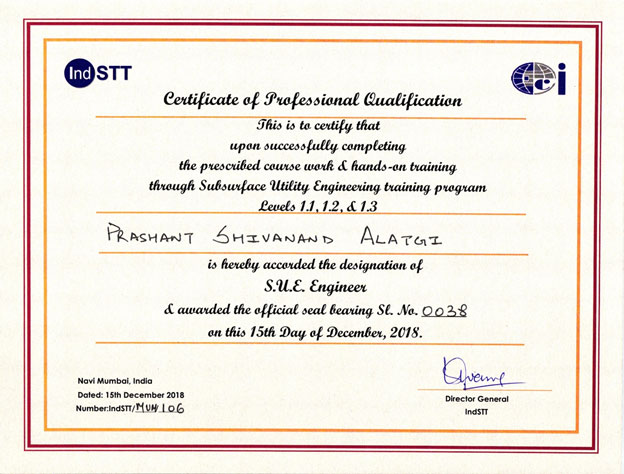 Certificate of award of Subsurface Utility Engineer (SUE) with Seal on 15-12-2018.